Bertha: Mail-Order Brides of the West 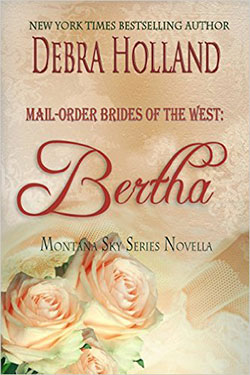 Bertha Bucholtz returns to her St. Louis home after an unsuccessful stay at the mail-order bridal agency. Her family house is overflowing with her thin, beautiful sisters and their many suitors, and shy, overweight Bertha is lost among the chaos. Even her baking skills—so praised at the agency—aren’t special, for her six sisters and her mother are also excellent cooks. Desperate to be living on her own, Bertha searches for a job as a cook but with little success.

Then a letter arrives from her nemesis at the bridal agency. Shrewish Prudence Crawford, now Mrs. Michael Morgan, invites Bertha to move to Morgan’s Crossing, Montana Territory and work as a cook and housekeeper at the boarding house for her husband’s miners.

Upon her arrival in Morgan’s Crossing, Bertha has to contend with Prudence, who seems to have mellowed—or has she? The boarding house is dirty, run-down, and full of uncouth miners. As the only single woman for miles around and a lauded cook, Bertha quickly becomes the siren of the tiny town as well as nearby Sweetwater Springs, as miners and cowboys flock to court her. Now the shy woman who had no choice of suitors has an abundance of them to pick from. She never would have dreamt having too many swains was a bigger problem than having none at all.