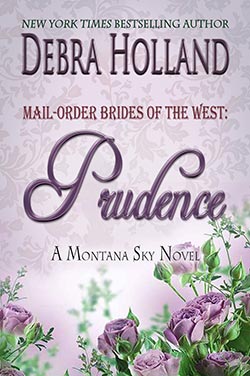 Mail-Order Brides of the West: Book 4

Shrewish Prudence Crawford is the last woman left at the Mail-Order Brides of the West Agency because she’s rejected every match offered to her as not good enough. One-by-one, she’s watched her fellow brides leave for their new lives and has heard tales of their happiness, and she wants that for herself—but not just any man. She will only take a husband who offers wealth and status.

Michael Morgan struck it rich in mining, or at least richer than anyone else in the tiny town of Morgan’s Crossing, Montana. He’s built himself the nicest house in town, which isn’t saying much when there are only ten homes in the whole place. He’s elected himself mayor of the population of 61 inhabitants and keeps his kingdom under tight control. When he hears stories of the mail-order brides arriving in nearby Sweetwater Springs, he decided to send for a wife, even if he has to exaggerate a mite to attract one.

A wealthy mine owner who’s the mayor of a town named after him and has a mansion sounds perfect to Prudence, even if the place is too close to the other mail-order brides whom she dislikes. But when Michael and his circumstances are not what Prudence dreamed, tempers flare and the fighting begins.

Can Michael tame the shrew, or are they destined to have a miserable marriage?