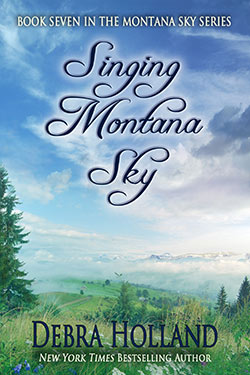 Beautiful, wealthy, and sophisticated, opera star Sophia Maxwell is living the life of her dreams. As the Songbird of Chicago, she’s lauded for her pure, rich voice and has a constant circle of admirers vying for her jaded attention. Then she loses her voice during a performance. Her doctor warns her to rest her larynx, or she’ll never sing again. Devastated, Sophia retreats to the frontier town of Sweetwater Springs to stay with her sister. She’s determined to recover and once again take the stage by storm.

An injury to logger Kael Kelley forces him to return to his parents’ home outside of Sweetwater Springs until he can heal enough to return to the logging camp he manages. He’s impatient to recover and concerned about his men, who’ve been left to work under the incompetent overseer who was responsible for his accident.

When Sophia and Kael meet, they have an immediate attraction. The handsome logger is as different from Sophia’s sophisticated suitors as can be. She decides a summer flirtation is the perfect way to enliven her boring convalescence. Then the unthinkable happens, and the Songbird of Chicago falls in love.