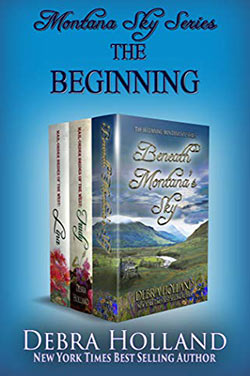 Three heartwarming novels from NY Times and USA Today bestselling author Debra Holland. In this foundation to the Montana Sky Series, three couples experience human trials and blossoming love amid the hardships of life in the West. Fans of uplifting, small town romances will delight in these tender romances of loss and love, set underneath the sweeping, blue Montana Sky.

Plain and timid, debutante Pamela Burke-Smythe is a wallflower at the high society Boston balls she attends, overlooked by possible suitors. One-by-one, her friends become engaged, and Pamela resigns herself to life as a spinster.

When rancher John Carter becomes guardian to his orphaned godson, Nick, nothing he does seems to help the grieving, angry boy. At his wit’s end, he believes that a wife might help draw Nick out, and lonely himself, John’s been thinking along the matrimonial lines for a while anyway. But small Sweetwater Springs, Montana, has no suitable candidates. He decides to visit his great-aunt Hester in Boston and bring back a wife who is kind and compassionate, can be a mother figure to Nick, and who can adapt to the hard life on the ranch.

Hester plays matchmaker for John, introducing him to Pamela. John responds to Pamela’s kind heart and believes he’s found the ideal woman. But Pamela never thought to marry a stranger and leave Boston, and her family and friends are against the idea. She musters all her meager courage to defy her loved ones and seize her only chance at marriage.

After a whirlwind courtship, the couple marries and travels west. Pamela discovers a run-down ranch house, a bunch of unruly cowboys, a sullen boy, and a different way of life. Can their new marriage survive the challenge?

MAIL-ORDER BRIDES OF THE WEST: TRUDY

The well-educated daughter of a lawyer, Trudy Bauer arrives at the St. Louis based Mail-Order Brides of the West agency full of excitement for an adventure of a lifetime. She's ready to face whatever an unknown groom and life in Montana can throw her way.
Farmer Seth Flanigan is all set to propose to Lucy Belle Constantino, until he finds out she's eloped with another man. Hurting and reckless, he's goaded into making a bet that he'll have a wife within two months. With no likely candidates in Sweetwater Springs, he sends to St. Louis for a mail-order bride.

Seth and Trudy have their trials to overcome, but just as their relationship seems to be working out, Lucy Belle returns to town--unmarried.

MAIL-ORDER BRIDES OF THE WEST: LINA

When Lina Napolitano’s nanny position ends, she has no desire to return to the crowded family compound in St. Louis and endure the pressure from all her boisterous and overbearing Italian relatives to marry a local man. After eight years of living away from her family, she’s accustomed to making her own decisions. Lina wishes to be a wife—just not of the local garbage man or fishmonger. Traveling as a mail-order bride to Sweetwater Springs, Montana seems like the perfect solution to escaping her smothering family and forging her own life.

After childbirth robs Jonah Barrett of his Indian wife, he is left to raise their toddler Adam alone. When Adam falls into the fireplace and burns his hand, Jonah becomes desperate to find the boy a mother—one who’ll care for him, accept the child’s half-breed heritage, and who doesn’t know Jonah’s whole past.

Will outgoing, demonstrative Lina fit into his solitary world and want to stay? Or will this mail-order marriage be over before the relationship begins?